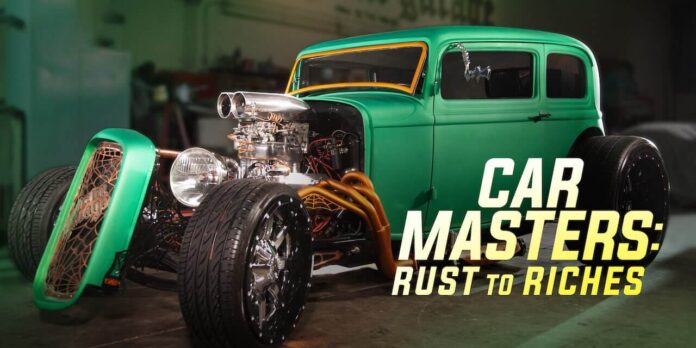 Netflix released an American reality TV show namely Car Masters: Rust to Riches. Many viewers are curious to know some crucial details about this show. Everybody is excited to know about the Gotham Garage team. However, the major question that is raised by a plethora of viewers is ‘whether this show and the automotive experts at Gotham Garage are fake or real.’ So, let’s explore this answer today.

Is Gotham Garage Real or Fake?

Does the team really work at Gotham Garage?

What REALLY Happened Behind The Scenes Of Car Masters: Rust To Riches?

The reality TV show ‘Car Masters: Rust to Riches’ was released on Netflix in 2018. In this show, Mark Towle and his team of automobile experts modify old vehicles and sell them at hefty profits. They usually restore cars that are bent or rusty. The show is highly successful and is viewed and liked by a great number of people all around the world. However, some people doubt the talent of Mark Towle and his crew at Gotham garage because the modification and restoration process done by the team is incredible and quite impressive.

Mark Towle, the owner of the Gotham Garage is in the limelight of the show Car Masters: Rust to Riches. He has a vast knowledge of machines and automobiles and has amazing skills in modifying ominous-looking cars into a whole different and alluring look. The net worth of the proprietor of the Gotha garage is around $1 Million.

The net worth of Constance Nunes, a proficient mechanic in the TV reality show Car Masters $2 million. She is a model as well and is highly notable on Instagram. She not only earns from this show but also earns well from social media platforms.

Shawn Pilot is one more popular team member who works at Gotham Garage. Apart from being a machine expert, he is a skillful poker player. He has a net worth of $70,000 as of 2021.

The other members of the Gotham Garage also earn well but their net worth is less than that of Mark and Constance.

After looking at the various aspects and doing thorough research, it can be concluded that Gotham Garage is real and the cast is also skilled having great knowledge of the automobiles and machinery parts. However, some things could be scripted and done for TV purposes. So, some parts of the show are real and some are planned. The scripted dialogues and parts add drama and emotions to the show to make it look engrossing.

So, Car Masters: Rust and Riches, Gotham Garage and the crew isn’t entirely fake, some parts are real. So, you can enjoy watching this world’s famous reality show on Netflix without any skepticism.

6 Tips to Prepare for Your First Business Loan

7 Reasons To Get A Business Loan

Why Digital Transformation Is Crucial For Marketing & Alignment 2022?

Benefits of Enrolling in an IELTS Coaching Institute

6 Tips to Prepare for Your First Business Loan

7 Reasons To Get A Business Loan